Film Bandits
The Sea Hut  海边的小屋
By Jeanne Pope
2019 (83 mins) Hybrid documentary
English/Chinese subtitles
English trailer/Chinese subtitles
​The Sea Hut  is a story of uprooted people. Filmed mainly in China, this is a hybrid documentary using fictional elements on identity, love, loss and memory. Using personal Super-8 archives, re-enactment, HD, drones, and highly saturated images, The Sea Hut flits back and forth between my mother’s life in Shanghai (as a young child with her beloved Chinese nanny), World War 2 Europe, and a fishing village in contemporary China, where a small sea hut becomes a central character and a catalyst for the veil between two worlds and two times: Europe and China, past and present.

An intimate portrait of the French Catalan painter Jean Capdeville (1917-2011), of whom Miró once said ‘Now there are two engravers at the Gallery Maeght’.  The film uses video and recorded interviews, archive photos, natural soundscapes, dream sequences, music and animation to create a series of interwoven vignettes which trace the key influences and life experiences that informed Jean’s artistic development and drove him to paint. It is also an exploration of the interconnected nature of time, memory and place: a testament to the power of the imagination and of faith in the creative spirit.

​Synopsis
Jean the painter lives and works in his mother’s house in Céret, southern France.  His studio is a labyrinth of 6 rooms, stacked with canvases turned to the wall. Shunning fame, artistic movements, deeply attached to his beloved Albères hills, and living simply, close to nature, following the seasons’ cycle through the spiral of passing years; outwardly nothing changes. Yet Jean is on a transformational personal and artistic voyage, a quest to resolve the pain and loss of war.

The story of a village during the grape harvest and Covid, where life is lived on the edge.

For the first time in twenty years, I spent the grape harvest in my village of Tuchan, in France, where I filmed for three months. I followed the harvest, the dramas, the rugby, the artisans, the old folk who keep the rituals, the newcomers, the travellers, and  the life of a village falling foul to Covid. 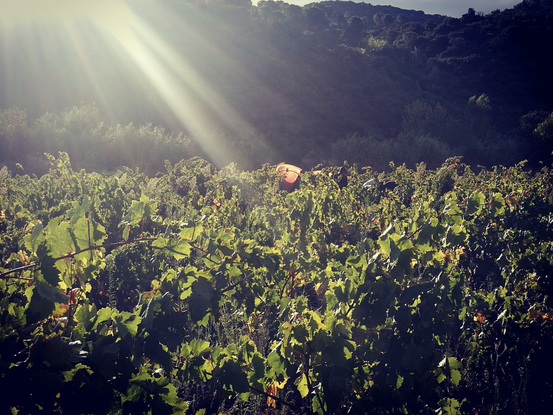